Germany's Accelerated Decarbonisation Agenda and Its Impact on Boardrooms

Germany may be facing heightened uncertainty ahead of September’s federal elections, but in one key respect, businesses and investors can already plan ahead: irrespective of who will form the next governing coalition, Germany is doubling down its efforts to lead the European and global race towards a net zero industrial economy.

A landmark ruling by Germany’s federal constitutional court on April 29 is adding momentum to an already strong political and societal current. The court effectively obliged the government to step up its efforts to reduce greenhouse gas (GHG) emissions, especially CO2, to ensure that the fundamental rights of future generations are not put at a disproportionate risk. Even though the court stopped short of mandating a more ambitious GHG reduction pathway until 2030 (only mandating a specification of this pathway beyond 2030), it argued that the current plan limited emissions allowances for the remaining period until 2050 to a degree “jeopardising practically every type of freedom protected by fundamental rights.”

The decision will have far-reaching transformative implications for the business environment and market outlook for many sectors, thereby increasing the need to move sustainability from ground-floor windowdressing to top boardroom strategic priority.

The Ruling Is Significant In Three Ways:

| Firstly, the decision fundamentally narrows room for (in)action from policy-makers. The court made clear that legislators’ obligations are not limited to the present and should critically include accounting for the impact of today’s decisions on future generations. This sets a real challenge to the prevailing political incentive to postpone hard choices to the future. Importantly, the judgment’s impact will extend beyond Germany, as it sends a strong signal to other European courts, where similar cases are currently under review (Belgium, France, Italy, and the European Court of Human Rights).

| Secondly, the decision has triggered political momentum that will translate into an even bolder legislative agenda in Germany and Europe. The German governing coalition, keen not to provide any weak spots ahead of an election campaign that will see climate as a top issue, immediately reacted by proposing an updated legislation that entails a steeper CO2 emission reduction timetable, raising its first mid-term reduction 2030 target by 25 percent from current levels to 65 percent (from 55%), then 88 percent by 2040 (vs. the 1990 baseline), and outlining a long-term target of climate neutrality already by 2045. The strong cross-party support means Germany will use its weight to push for the ambition to be matched on a European level, as Chancellor Merkel just indicated: “As a long-term industrial nation, we are a role model and cannot expect anything from other countries if we don’t find solutions ourselves. We need to make sure that all other European Union nations are on the same path.”

These goals will be translated into concrete measures by upcoming national and EU legislation that will reshape the market environment sector-by-sector. The measures include a sharpened and possibly broader emission trading scheme (covering buildings and transport), increased carbon pricing, a big push for renewables, stricter sector specific targets (e.g. industry, transport, and energy), and an action program of companion measures in different sectors. The next big milestone to watch will be the EU Commission’s “Fit for 55” legislative package scheduled for July that will translate the EU’s 55% goal into specific member state and sector contributions, marking the starting point for an intense legislative agenda moving forward.

| Thirdly, these developments will in turn accelerate the transformation debate across boardrooms. The shifting regulatory outlook is adding to the secular shifts in consumer preferences, reallocation of capital into sustainable assets (also supported by forthcoming regulatory changes), and talent emphasizing sustainability and purpose as key decision factors. The confluence of these trends means sustainability is no longer a but the top boardroom priority, as its effects go to the core of business models and firms’ competitive and market positioning. 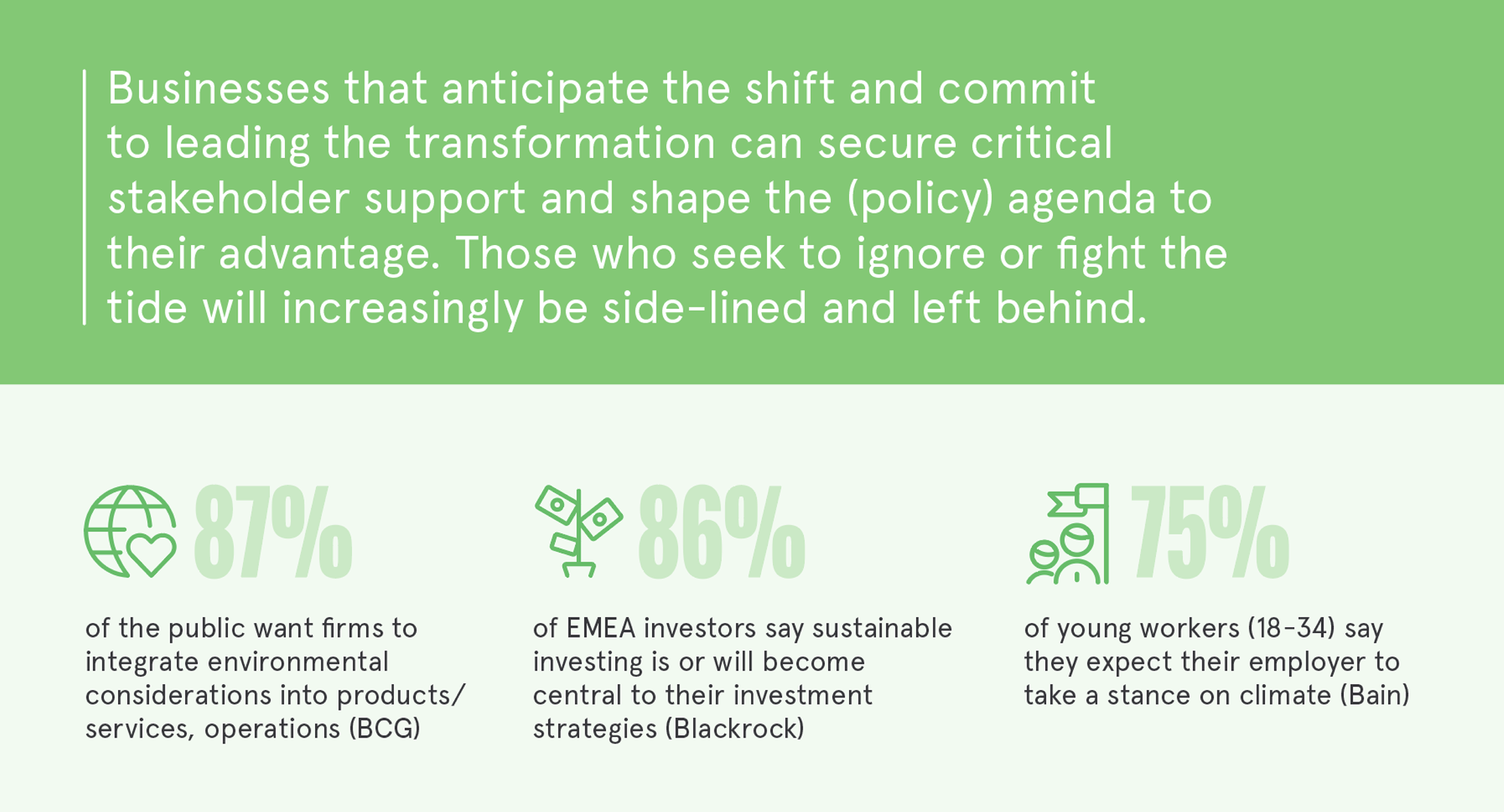