Ever since the fall of the Berlin wall in 1989, Western policy has been guided by two underlying beliefs: that the world would become ‘flat’; and that its states would ultimately adopt the institutional, economic and value systems of the West. For many years, these beliefs served as the north star for policy-makers’ decisions and formed the basis for businesses’ global strategies. However, at some point during the last decade, this north star started to look increasingly at odds with the actual state and direction of the world. Barriers have been on the rise, and western-led order in retreat. And yet, no new navigational chart, let alone north star, has so far emerged to point us in a clear direction. Looking at the bigger US-EU-China dynamics at play, this is our sketch of such a chart.

However, it would be wrong to read into this a retreat from global markets, as the strategy also spells out a further opening up, which reflects China’s interest in raising productivity through exposure to international competition and a shift to a market-based pricing of credit risks – in other words, moving towards a market economy. Recent policy changes lifting foreign ownership restrictions indicate the significant dynamics underway in spite of global tensions: While global FDI collapsed in 2020, China hit a new record with inflows of USD163bn, overtaking the US as the world’s largest FDI recipient.2 And with foreign holdings of Chinese onshore financial assets at nearly 1 trillion USD (Q3/20)3, China’s equities and bond markets are now the second-largest worldwide, with US investors emerging as key drivers of this trend. The new EU-China investment agreement is set to further reduce investment restrictions, boosting the EU’s hitherto modest investments into China.

Global Perspectives and Expectations: Expert Views from Across the World

USA: The Biden administration will continue President Trump’s tough stance on China, although with more nuance and predictability in policy making. For Western corporates, this means continued scrutiny on Chinese operations, technology, investments and M&A that are either based in China or linked to China-owned companies. It is more important than ever for Chinese corporates to build trust based on facts and transparency.

China: The credibility of the U.S. model has suffered abroad, and especially in China. Western companies will increasingly need to navigate nationalistic sentiment in China, while avoiding sounding sanctimonious about Western values and business models.

Japan: will look to benefit from evolving US-China relations, not only politically but also economically – especially in winning infrastructure work in ASEAN.

UK: After attempting a cautious but co-operative relationship with Beijing, the UK Government has been driven by events towards a more hawkish stance. Concern over the treatment of the Uyghur people, along with changes in the position of Beijing towards Hong Kong, seen to have violated Sino-British joint declaration, have brought a distinct chill to the UK-China relationship. The UK policy response has been notable, with Huawei restricted from expansion into UK 5G, a new FDI screening process driven largely by concerns over Chinese investment, and sanctions for UK businesses with supply chains exposed to labour abuses in Xinjiang. Of most concern is that the UK does not appear to have a coherent strategic policy response to the rise of China to global superpower status, but rather a patchwork of individual responses to individual events.

EU: The EU’s relationship to China will continue to be characterised by ambivalence with areas of cooperation (climate change, global stability), competition (strategic industries), and conflicting values. EU business interests and an understanding of China’s growing global importance will continue to provide a counter current against decoupling. Chancellor Merkel pushed hard for more cooperation with China. Soon, it will be up to others to make a call whether to continue or to change this strategy.

Middle East: The GCC will continue to balance its relations between Beijing and the West, selling China its energy and enjoying bilateral infrastructure deals under the Belt Road Initiative, whilst Western commercial interests will remain central in driving the region’s attempts at economic diversification away from oil under a Western security umbrella.

Telecom operator notifies Federal Ministry of the Interior of intention to use critical components (as defined by Federal Office for Information Security) and provides the vendors warranty statement for trustworthiness (content defined by Federal Ministry of the Interior, also covering security concerns and assurances e.g. on risks arising from foreign „legal obligations“). 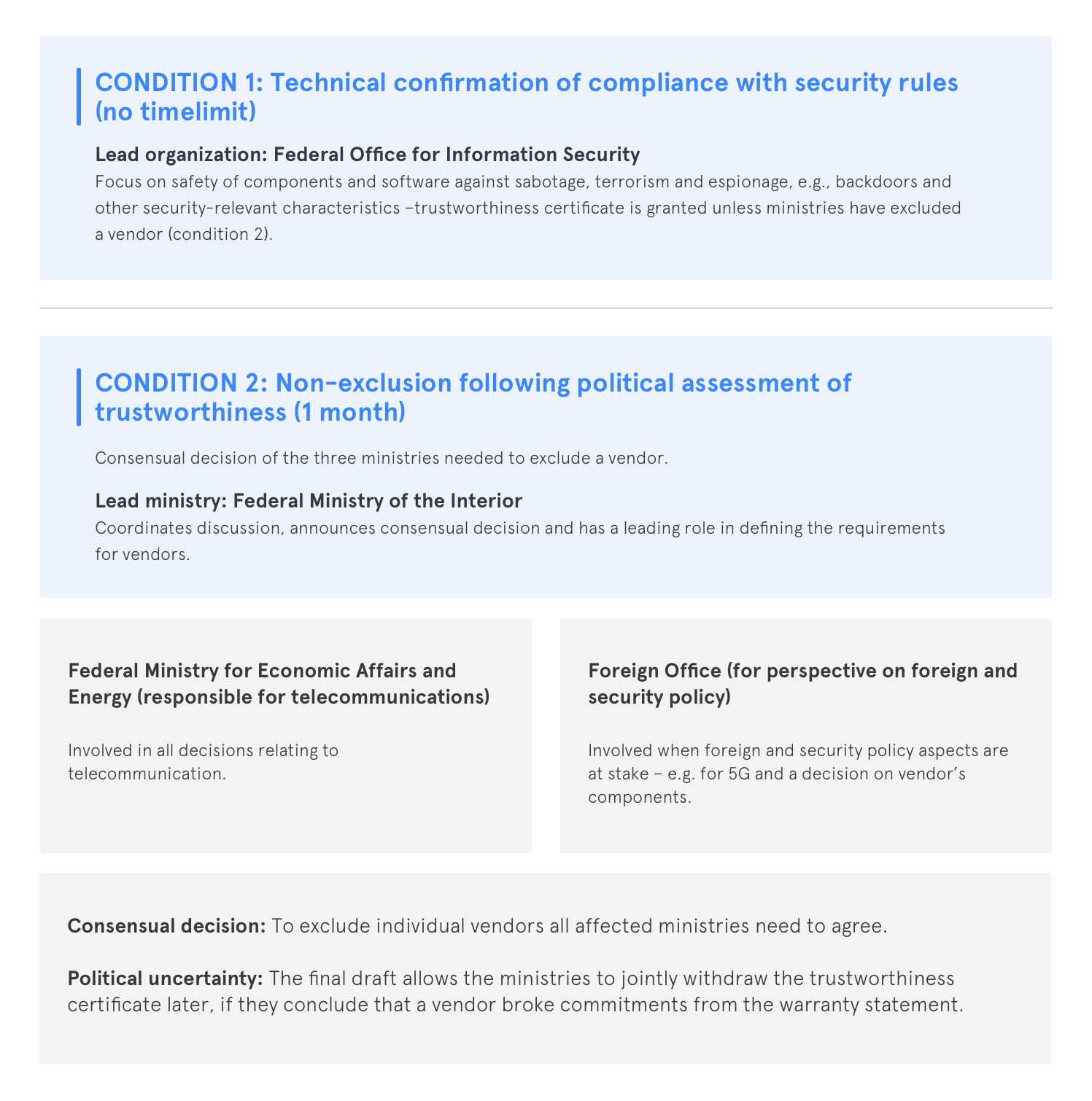